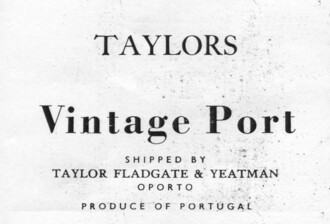 Opaque black at the centre with a narrow purple rim. Uncompromisingly Taylor’s in style, elegant and precise. The nose is threaded with very fine, linear fruit, heady and complex but restrained by a graphite minerality. Quinta da Vargellas has imprinted its signature fragrance of violets, which hangs like a scented veil over the wine, and there are discreet terroir notes of citrus, wild herbs and gumcistus. The nose is still reserved but there is impressive depth and background, as well as hints of complexities still to emerge with time. The palate is held in place by lithe, muscular tannins, firm and grippy on the finish, and ends with a powerful surge of crisp, pure berry fruit.

The origins of Taylor, Fladgate & Yeatman lie in the 1670s, with Job Bearsley, an English merchant in Minho. Bearsley's initial activities were in the wool trade, and the "4XX" logo, originally his woolmark, was branded on bales of wool, and later, casks of Port wine, for shipment. The firm was officially founded in 1692, and Bearsley moved his offices to Oporto; this date places Taylor, Fladgate & Yeatman as one of Oporto's oldest Port houses. Bearsley’s son Peter was the first Englishman, in the early 1700s, to venture into the primitive reaches of the Upper Douro to purchase wines. Another son, Bartholomew, acquired the first British-owned property in the Douro in 1744, the Lugar das Lages. Located at Salgueiral, close to the old town of Regua, and including the 18th-century Casa dos Alambiques, it is still among Taylor Fladgate's operative holdings.