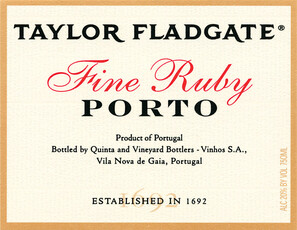 The Fine Ruby Porto is made from selected grapes from the best vineyards of the Cima Corgo and Douro Superior. Taylor Fladgate is an area leader in winemaking technology, as one of only three Porto producers to pioneer the development of piston fermenter techniques, called Port Toes, which extract significantly greater flavor and aroma than conventional pump-over fermentation. Fermentation is halted by the addition of grape spirits before all the residual sugar has been fermented, creating a sweet, fortified wine.

TASTING NOTE
A bright ruby-colored, sweet wine with aromas and flavors of sweet cherries, cassis, black plums and red fruit jam. A full body and supple tannins round out the wine on the palate.

FOOD PAIRING
One of few wines that pair successfully with milk chocolate, ruby Porto is also excellent with berry desserts or on its own after dinner. Made to be consumed immediately, without further aging.

The origins of Taylor, Fladgate & Yeatman lie in the 1670s, with Job Bearsley, an English merchant in Minho. Bearsley's initial activities were in the wool trade, and the "4XX" logo, originally his woolmark, was branded on bales of wool, and later, casks of Port wine, for shipment. The firm was officially founded in 1692, and Bearsley moved his offices to Oporto; this date places Taylor, Fladgate & Yeatman as one of Oporto's oldest Port houses. Bearsley’s son Peter was the first Englishman, in the early 1700s, to venture into the primitive reaches of the Upper Douro to purchase wines. Another son, Bartholomew, acquired the first British-owned property in the Douro in 1744, the Lugar das Lages. Located at Salgueiral, close to the old town of Regua, and including the 18th-century Casa dos Alambiques, it is still among Taylor Fladgate's operative holdings.