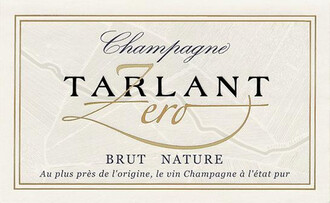 Tarlant’s NV Brut Nature Zero is, as always, a wonderful introduction to these wines. The non-dosé style lends energy to the citrus, crushed flower and dried herb flavors. Crisp, energetic and beautifully taut, the Brut Nature Zero is a Champagne of pedigree and class, especially within its peer group. This release is based on the 2010 vintage, with the addition of some reserve wines, and was disgorged on January 8, 2018, with much more time on the lees for a NV entry-level wine. All of the estate’s attention to detail comes through in this gorgeous Champagne.

In 1687, Pierre Tarlant began cultivating his first vineyards in Aisne. The family stayed put for almost 100 years before moving to the village of Oeuilly in 1780. At the turn of the 20th century, Louis Tarlant took over as head vigneron. His tenure would prove instrumental to shaping the Tarlant legacy, principally due to his involvement as mayor of Oeuilly in the rarely discussed Champagne Revolution, a tumultous movement that you have probably never heard of.

By the early twentieth century, it had become increasingly common for the big Champagne houses, who even then had a strong-hold on the commercialisation of Champagne, to bring in fruit from all over France and even different countries (the farthest being Portugal!), then vinifying and selling the wine as Champagne. When this became common knowledge amongst growers in the region, many were infuriated that such practices could be happening right under their noses. Through rigorous organisation, many villages managed to block off the points of entry of outside fruit, and well as skillfully organizing themselves to codify the Champagne region. As a result, Louis helped achieve
worldwide recognition of the AOC in 1911 and contributed to the establishment of the AOC Champagne region in 1927.