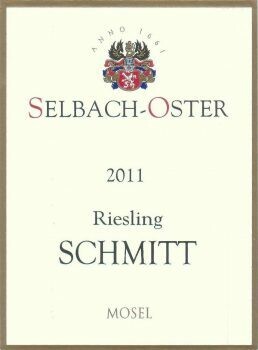 This is one of a trio of en-bloc harvested single parcels Johannes will introduce at the end of this report. Bearing in mind that the fundamental principle is to wait as long as possible and then pick the whole vineyard in a single pass, it stands to reason that everything in 2018 would be ripe – very ripe. And very clean. Thus the wine is more of-a-piece than usual, and it’s also well up into the Auslese echelon. Indeed this wine is so rich it almost subsumes its charged minerality – almost! If the palate follows the aroma that mineral will emerge, though it may take some years.

“Selbach-Oster might be one of the hottest domains along the Mosel, if not in all Germany.” – Stephan Reinhardt, The Wine Advocate.

Today, Johannes Selbach and his wife Barbara, with the increasing help of son Sebastian and daughter Hannah, manage their vineyards and winery with passion and respect for the estate’s long held traditions. 55% of their 24 hectares of vines are on their original rootstocks, in Zeltinger Himmelreich, Schlossberg, and Sonnenuhr; Wehlener Sonnenuhr; and, Graacher Himmelreich and Domprobst. These vineyards of weathered Devonian slate are on a steep, contiguous slope facing south-south west and represent some of the most prestigious sites in all of the Middle Mosel, in fact 85% of the Selbach’s vines are on steep slopes. The Selbach family’s heritage in the wine business dates to 1660: Selbach’s ancestors shipped wines down the Mosel in their own ships, the wine carried in oak barrels made by cooper Matthias Oster, the great-grandfather on the paternal side of the family. Thus, the winery developed as both a top estate producing some of the region’s best wine, and also as a négociant and brokerage firm, consolidating the production of smaller growers.

Johannes, like his late father Hans, has continued the use of traditional oak fuder in his cellar, bringing in new large casks every few years. Vinification is carried out in a combination of fuder and stainless steel, in a hands-off manner with no fining, and predominantly with wild yeasts. The focus is on meticulous work in the vineyard with the aim to produce and bring home perfect fruit. In 2016 Christian Vogt, winemaker at Kartauserhof for many years added even more talent to the winery.

The hallmark of the estate is 3 old parcels that Selbach-Oster harvests en-bloc; or, as single pickings, with no selections pulled from the vineyard prior to harvesting. The Rotlay (in the Zeltingen Sonnenuhr, rich in iron ore), the Schmitt (in the Zeltingen Schlossberg), and the Anrecht (in the Zeltingen Himmelreich) are all old parcels high on their respective slopes and post trained on their original rootstock. Typically, Auslese is selected by successive passes through the vineyard—picking fruit for Kabinett and Spätlese first and leaving the healthiest berries on the vine to concentrate. For the en-bloc wines selection of this type is avoided, in order to maintain a holistic flavor profile that contains that of ultra-ripe grapes, optimally ripe, and of lesser-ripe ones which have the ability to reflect a complete terroir of both place and moment. Because his approach in winemaking is minimal, Johannes Selbach will allow his wines to ferment naturally, as slow or as complete as manifest, resulting in dry wines in some vintages and fruity in others.