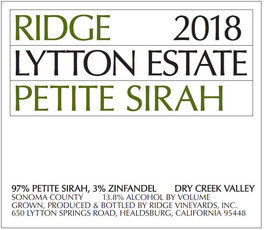 This is our tenth vintage of petite sirah from Lytton Estate. The majority of the fruit comes from the clay-rich soils at Lytton West. Here, petite sirah thrives, producing small-berried clusters with intense color. All of the grapes were destemmed but left to ferment as whole berries to manage tannins and enhance fruit. This full-bodied wine will age nicely over the next fifteen years.

The 2018 Lytton Estate Petite Sirah is totally stunning. Bright, focused and powerful, the 2018 presents a breathtaking interplay of rich Petite fruit allied to a classic, old-school sense of structure. Dark blue/purplish fruit, leather, licorice, lavender, menthol and gravel are some of the many notes that infuse the 2018 with all those layers of flavor. The 2018 is a real stunner.