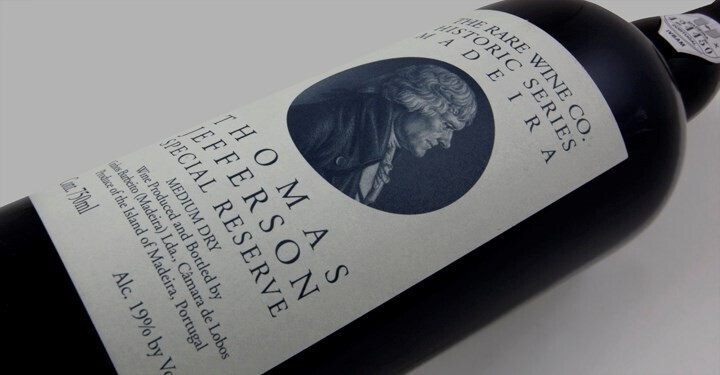 As an American, Thomas Jefferson had no peer in his appreciation of French wines.

But that seed wasn’t planted until he was in his forties, by which time he’d been passionate about Madeira for at least 20 years.

Born in 1743, Jefferson came of age at a time when Madeira was the king of wine in America—always present on affluent tables and ready to toast important events.

For years, we’ve wanted to honor Jefferson’s love of Madeira with a commemorative bottling as part of our Historic Series. And in 2012, The Thomas Jefferson Foundation and Monticello agreed to collaborate with us on this project.

After more than a year’s work—perfecting the blend and producing the wine—we launched it with a tasting and lecture at Monticello on October 9, 2013.

The wine itself is a spectacular fusion of elegance and depth, and youth and antiquity. The oldest component in the blend is more than 80 years old, a fact that Jefferson would undoubtedly have appreciated.

Like others of his time, Jefferson had his own Madeira preferences. While a student, he fell in love with a “recipe” for a particularly elegant Madeira he’d learned from the wife of his law school mentor.

That recipe called for a blend of one-tenth “superfine Malmsey” with nine-tenths dry Madeira. Jefferson never lost his taste for what he came to call “silky Madeira.”

Decades later, he defined “silky” wines as having the taste of “dry wine dashed with a little sweetness, barely sensible to the palate: the silky Madeira we sometimes get in this country is made so by putting a small quantity of Malmsey into the dry Madeira.”

A Toast to TJ

Americans consider any article owned by Thomas Jefferson to be nearly sacred, and this extends to wine.

But since Jefferson’s death in 1826, only a few “Jefferson” Madeiras are known to have surfaced, always bringing high prices at auction.

The earliest sighting of a Madeira supposedly owned by Jefferson belonged to an Alexandria, VA, tavern owner John Gadsby. These were auctioned in 1839, and then subsequently in 1843 and 1845.

In 1852, a demijohn of Thomas Jefferson-owned Madeira was among the prized lots in the famous Josiah Lee sale in Baltimore. These were purchased by the descendants of the Revolutionary hero John Eager Howard and remained in that family for at least another four decades.

And finally, there’s the 1800 “Jefferson” Madeira acquired by the great Baltimore connoisseur Douglas H. Thomas in 1890. In 1896, Thomas gifted a bottle to President Grover Cleveland, as thanks for having “perpetuated Jeffersonian democracy.”

For all of these Madeiras, actual ties to Thomas Jefferson are as yet unproven. But Aaron Nix-Gomez is doing the best original research we’ve seen on Jefferson and Madeira. Look for an in-depth article soon on his blog, hogsheadwine.com. Our thanks to Aaron for his help with our own research.

Our Thomas Jefferson Special Reserve captures the spirit of this elegant style. The blend is sheer genius, with the 10% of Malmsey represented by a Favilla Vieira Malvasia believed to be at least 80 years old. For the first release, fewer than 100 cases were made, of which about one-third were set aside for Monticello.

As President, Jefferson ordered (in barrel) the equivalent of more than 3500 bottles of Madeira for the White House cellar over the first three years of his presidency.

These were supplied by Thomas Newton of Norfolk, Virginia. Newton recommended them to Jefferson as “Brasil Quality ... superior to any other.”

Jefferson loved the Brasil Madeira, reordering it on a regular basis. But on one occasion Newton was able to supply only “good” rather than “superior” quality as the latter was already spoken for.

So, Jefferson took Newton up on his offer of a yearly allocation of the “superior” shipped directly from the island. And when in France in the 1780s—as the American minister—Jefferson asked that his Madeira be shipped via the U.S. rather than risk getting Madeira of questionable quality on the Continent.

Jefferson was not only the foremost American wine enthusiast of his time, he was also its savviest.

The Thomas Jefferson Special Reserve is a fitting tribute to a towering American, both as statesman and wine connoisseur. We are pleased and honored to be able to offer it.