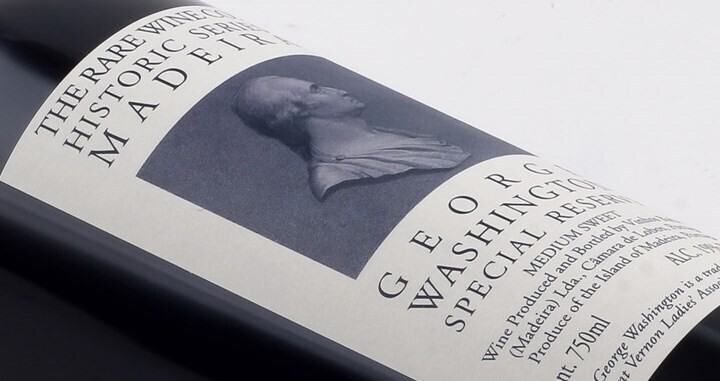 “If it were in our choice, for him the rich Madeira should flow in copious streams.” James Madison of General George Washington, 1780

Everyone who’s seen the musical “Hamilton” knows not only of the Founders’ genius, but also their imperfections. Alexander Hamilton comes across as brilliant, but profoundly flawed, while his killer, Aaron Burr, appears as a conniving self-promoter. But there is one figure who emerges as unerringly heroic: George Washington.

As General and President, Washington sacrificed much both to press the cause of independence and to hold together the country he’d help create. And though he was no longer President when he died in 1799, many wondered if America could survive without him.

Over the past decade, The Rare Wine Co. has created a number of Madeiras honoring the nation’s Founders, from Ben Franklin and Richard Henry Lee to Thomas Jefferson and James Madison. But the most worthy honoree is Washington, whose Historic Series Madeira appeared for the first time in 2016.

Made in collaboration with Mount Vernon, this wine celebrates not only The Father of Our Country but also Washington’s love of Madeira, which emerged in the 1750s and continued until his death. In 1798, just a year before Washington died, a visitor to Mount Vernon reported that the former President “loves to chat after dinner with a glass of Madeira in his hand.”

The Rare Wine Co. is indebted to both Barbeito’s Ricardo Freitas, who makes all of the Historic Series wines, and Aaron Nix-Gomez (the wine historian who writes hogsheadwine.com), who sifted through Washington’s Madeira correspondence to learn what he most liked to drink. Based on what Aaron found, we’ve concluded that Washington favored “rich” Madeira, which in the parlance of the time meant sweet.

For each release, Ricardo pulls out the stops to craft a Madeira of elegance to honor Washington. The blends consist not only of wines ranging from 10 to 20 years old, but also very old wines to give them depth. But the balance was even more extraordinary, consisting of some very old wines.

In terms of sweetness, the style of George Washington Special Reserve is that of a Bual, but with the superb acidity characteristic of very old Madeira.