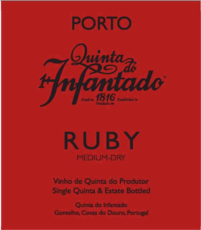 Touriga Franca/Touriga Nacional/Tinta Roriz/PLUS old field-blend red varieties. From exclusively Class A parcels (Serra Douro, Lapa, Castelos) totaling 11.5 hectares on poor schist soils. The fruit is hand-harvested, partly destemmed and fermented in lagar and tank; fermentation is stopped with 77%-degree wine brandy. The wine is aged in a variety of tonel and balseiro, which are tall wooden tanks from 3,000-60,000 liters with thick staves that slow down oxidation. It finishes at a modest 19.5% and 70 grams/liter of residual sugar, in other words considerably drier than most rubies. The average age in bottle is 2-3 years. 20,000-30,000 numbered bottles produced annually.

Quinta do Infantado has been a leader in estate-bottled Ports since 1979. Until that time, all exported Ports had to be shipped in bulk to Vila Nova de Gaia, 60 miles west of the Douro Valley, where they were bottled and shipped. This practice effectively prevented small private producers from exporting their wines, since the cost of running an operation in another town was prohibitive for these vineyard owners. In 1986 the laws were changed.

The Quinta is based in Pinhão, specifically in the subdistrict of Gontelho where the best Port vineyards may be found. The estate has been owned by the Roseira family since the end of the 19th century and is now managed by brother and sister, João Roseira, vineyard manager/winemaker, and Catherine Roseira, Chief Executive. The vineyards (terraced, very steep and hard-soiled) are worked in traditional methods.

Finally, the Vintage Ports of Quinta do Infantado are singularly distinctive in their “meio-seco” (medium-dry) style. The Roseira family is very careful when declaring a vintage year and will not do so if there is the least doubt about the concentration and quality of the vintage.

We have been truly enthusiastic about these wines since the day one of our winemakers in the Rhône insisted we taste a terrific Port he had brought back from a recent trip to the Douro valley. We are infinitely grateful for his good opinion and taste.