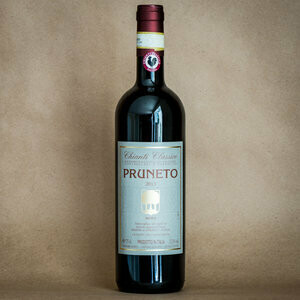 SKU 400000014432
$21.99
Out of stock
1
Product Details
An excellent example of classic, traditional Chiantiâ€”bright acidity, red cherry fruit, subtle spice, and a luxurious, rich finish with well-balanced oak. This is old school Tuscan wine, made responsibly and without interest in fads or modernization.Viticulture: Farmed Organically

Where: Radda in Chianti, on the road to Volpaia, Tuscany

Pruneto is a nice old farmhouse on top of a hill surrounded by vineyards. Riccardo’s father bought it in the late 1960’s. Previously their family lived in Milan. “My father bought it because it was cheap, not destroyed but basically just a shell of a house.” He paid the equivalent of 3,200 euros for the house, vineyards and olive groves.

“Only poor people lived here (at that time)” Lanza said. “The work was too hard. During the economic boom (after World War II) people moved to Poggibonsi, to towns near railways and autostrada.”

Riccardo Lanza was busy arranging a 40-year reunion party for his graduating class when I arrived. He went to university for agriculture. After graduation he worked in Lombardy, south of Milan. In 1980 Pruneto’s one farm worker retired, and Riccardo took over.

His father was attracted to Pruneto through friendship with seminal, legendary resident Sergio Manetti of Montevertine.

RICCARDO LANZA BETWEEN VINEYARD AND CELLAR.

“Sergio was a little genius. He was also the right person at the right place. He invented something, pure Sangiovese.”

The view from Riccardo’s steep, winding driveway is exceptional, steep hills covered with vines. Across the valley is an impressive centuries-old estate that apparently used to be a monastery. Many farmhouses have been converted into vacation homes and villas. The clean air and bucolic setting may add to Riccardo’s propensity to philosophize.

“This is the history of Italy over the last 3,000 years. We think we are the best. It’s not true… but we copy the French.” Lanza and his father were inspired by Sergio Manetti’s courage to do something authentically Italian.

“It’s not easier to make a bad wine… OK maybe good wine is a little harder to make (but not much.)”

Riccardo has a son and a daughter, but they are not interested in making wine, at least at present. “It’s difficult for a young person to understand. I like to live in the country. I prefer to work in the country, not in the cellar. I have wonderfully positioned vineyards.”

The estate is tiny, 3.5 hectares divided into just two vineyards, surrounded by forest. The older site is west-facing and was planted in 1972. Lanza says he never has to worry about sunburned grapes from this field. His other parcel was planted in 1999, and is surrounded on all sides by forest. Lanza describes with wonder the experience of walking through the forest to this hidden vineyard. All his vines grow at a temperate 550 meters above sea level.

In the cellar Lanza uses large barrels and simple equipment to make his wines. He has used the same press for 31 years. The cellar is clean, but not high-tech. “It’s difficult to find the right machine for me. I am low-tech.”

“The wine-making world is all about power. Which is why I prefer to grow grapes, or potatoes, or tomatoes.”

Riccardo Lanza makes Chianti Classico that lives up to its prestigious designation. His work defines and frames a real view of Radda. Tasting real Sangiovese likes Pruneto’s emphasizes how this grape is still underrated and under-appreciated, even in Italy. Sangiovese can make the best red wine, and is the flavor of Tuscany.