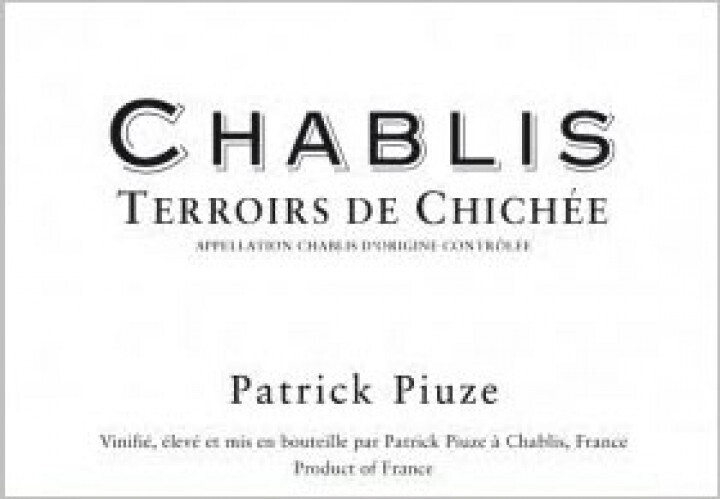 Chichée is on a plateau near the 1er Cru Vaucoupin vineyard. Vinified and aged in tank. Savory, taut, and mineral.

"The 2020 Terroir de Chichée bottling from Domaine Piuze is also excellent, with impressive precision evident on both the nose and palate. The bouquet wafts from the glass in a blend of lemon, pear, anise, chalky soil tones, citrus peel, fruit blossoms and just a hint of paraffin in the upper register. On the palate the wine is deep, full-bodied, focused and racy, with a fine core, lovely soil signature, bright acids and a long, complex and vibrant finish. Fine juice. 2024-2040+."

Patrick Piuze- a Montreal native- took the region by storm when he arrived over decade ago. He worked for Leflaive, Jean-Marc Brocard and Jean-Marie Guffens before starting his own label in 2008, and has very quickly come to be counted among the legendary names of the region. The guy is hella-good fun to hang out with... and while that may sound like an irrelevant detail, it is not: Piuze works with purchased fruit, and his great relationships with the growers of Chablis have allowed him access to choice parcels in all of the great sites.

As for technique, he is a maverick. While 90% of Chablis is machine-harvested, he harvests everything by hand, a paramount factor in the quality of his wines. While most cellars use a pneumatic press, he uses a vertical one because he likes the initial blast of oxygen for the wines in hopes of preventing pre-mox later, a way of thinking also espoused by Jean-Marc Roulot.

While most vintners make one blended cuvée from mixed sites for their villages wine, Patrick obsessively crafts no fewer than EIGHT different villages-level wines, each giving a distinctive expression of terroir. In our tastings together, he touts them as the qualitative peers of his 1er Cru’s, and with good reason—they are extraordinary. To make wines this way, Patrick has become a walking encyclopedia of the terroir of the area. On our recent visit to his winery, Patrick explained that Chablis is made up of rolling hillsides and valleys. The tops of the plateaus are generally Petit Chablis, north-facing vineyards are generally village-level Chablis and south-facing vineyards are 1er Cru; the Grand Cru hill has direct west/south-west exposure. The vineyards on the left bank of the Serein River generally have more clay and produce richer wines; here you find the villages of Courgis, Chichée, and 1er Cru vineyards: Forêts, Butteaux, and Vaillons. The vineyards on the right bank have much less clay top soil and more limestone – this is where you find the Grand Cru, also the villages of Fleys and Fyé and the 1er Cru Vaucoupin, Montée de Tonnerre, and Fourchaume. The right-bank wines are characterized by an intense minerality and more lean fruit in comparison to those from the left bank.

In the cellar, fermentations are spontaneous and go at their own pace. The village level "Terroir" series wines are fermented and aged mostly in old stainless steel tanks that are not temperature controlled. Premier Cru and Grand Cru wines are fermented and aged in used barrels for ten months. The barrels are always from high-acid years, currently 2002, 2004, 2007, 2008, and 2010. Patrick explains that the first year that the barrel is used, there is not only an exhange of oak to the wine, but also of the wine to the barrel. So he avoids barrels that were first used in a warm vintage, thereby avoiding tropical notes from the barrels to his wine. All wines go through malo naturally. In some years, fermentations finish after two and a half weeks and in others, they last three months. The village level wines are bottled in the spring and 1er Cru and Grand Cru wines are bottled in July. All wines are bottled with a very gentle clay filtration.