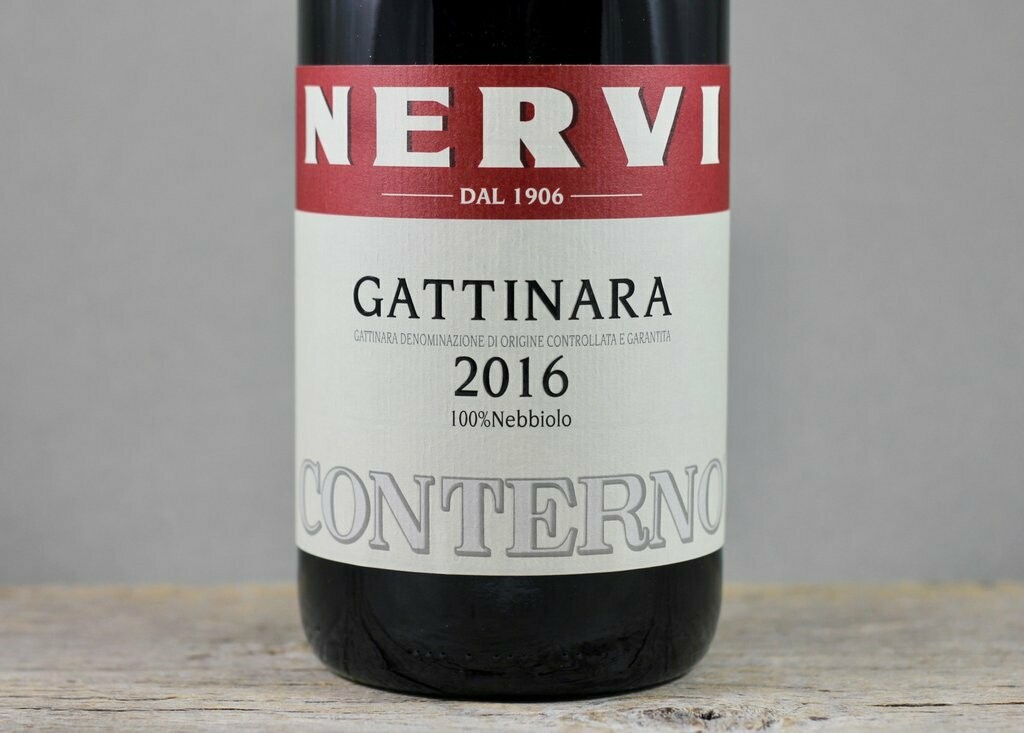 DESCRIPTION
Roberto Conterno acquired Nervi in 2018, and this is the first vintage in which the brand name is listed as Conterno Nervi (as opposed to Nervi Conterno, or just Nervi). Fully under his winemaking watch, the 2018 Gattinara comes from a vintage that performed well in this part of Alto Piemonte. Roberto had the confidence to produce his two single-vineyard expressions (Vigne Molsino and Valferana) in 2018, which is not exactly intuitive, as the growing season proved more challenging in other parts of Piedmont. But Roberto interprets each vintage with a keen eye and deft approach that is often contrary to his peers. I think what stands out here is the freshness, the balance of acidity that plays nicely into the minerality of the wine and the brightness of its wild rose and redcurrant flavors. This Gattinara carries a lot of fruit and primary intensity, all backed by subtle touches of balsam herb and soft tarry end notes. This 2018 underlines the elegance in Nebbiolo.

The 2018 Gattinara is a stunning wine in the making. Extraordinary in its complexity and nuance, the 2018 dazzles with a kaleidoscope of aromas, flavors and textures. Kirsch, hard candy, flowers and lively acids captivate the senses. The 2018 is elegant, weightless and full of character. It is, quite frankly, everything Gattinara can and should be. This is a great place to start for readers who want to know why the 2018 vintage is so magical at Nervi-Conterno. If it weren't for the single-vineyard wines, I would have said the 2018 is one of the very best wines that have ever been made here!

The Giacomo Conterno winery is one of the greatest names in all of Piemonte. The estate was founded in the 1920’s by Roberto Conterno’s grandfather Giacomo from whom the estate gets its name. Giacomo was not the first in the family to make wine but he was the first to label the bottles with the family’s name. Giacomo’s father, Giovanni, had made Barolo from purchased grapes and whatever was not consumed at the family’s tavern during this period was sold in barrel, as was the custom throughout the region in the early twentieth century. Their flagship Riserva Barolo, Monfortino, was first conceived as a means of showing off the quality of their best wine and the first confirmed vintage to have been made was the 1924. There are reports that a 1912 Monfortino was made by Giovanni, but the family members cannot recall if this was indeed the case. In any event, after his return from World War I, Giacomo Conterno and his father Giovanni started producing Barolo in earnest, and a legend was started.

Giovanni Conterno passed away in the 1930’s and his son Giacomo took over running both the tavern and the winery. Giacomo had two sons, another Giovanni and Aldo, who were given the reigns of the family business in the early 1960’s. Giovanni (son of the estate’s founder) had vinified the 1958s with his father, and was responsible for the estate’s wines from 1959 onwards. Younger brother, Aldo Conterno was interested in experimenting with a more modern style of Barolo, and so in 1969 they separated ways and Aldo Conterno decided to start his own winery. Giovanni continued making wines as his father and grandfather had done before them, making great, traditional Barolo of uncompromising quality. Today, the torch has been passed to third generation winemaker, Roberto Conterno. Roberto worked side by side with his father for many years before his passing in 2004. Roberto himself is one of the most fastidious and perfectionist winemakers we have experienced, and many feel he has taken the winery to even greater heights than his predecessors.

The Conterno style of Barolo has always been ultra-traditional, with a long maceration followed by extended aging in large, oak casks (botti). In the old days, aging was anywhere from four to ten years prior to bottling, and often longer, sometimes with multiple bottlings from the same vintage. Today, the "regular" Barolos are aged for four years before bottling, and the Monfortino for six to seven years - the only "modernist" concession in the entire vinification and aging process!

Like many top producers, in the old days, the Conternos made their Barolo exclusively from purchased grapes. The Conterno family sourced from some of the best growers in the commune of Serralunga d’Alba and/or Monforte d’Alba. In 1974, the Conterno family purchased the 14 hectare vineyard of Cascina Francia, one of Serralunga d'Alba's most choice parcels. The first vintage to be produced from this vineyard was the legendary 1978...quite an auspicious beginning! Interestingly, while the 1978 “regular” Barolo was made from grapes in Cascina Francia, it was not until the 1979 vintage that the name of the vineyard appeared on the label of the regular bottling.

Today, the estate owns vineyards in three of the top Crus in the commune of Serralunga, having added Cerretta in 2008 and Arione in 2015. Today, there are three single-vineyard Barolo bottlings at Conterno, plus the Monfortino Riserva, which is only released when the wine possesses the right characteristics to be a “reserve wine”. Up until the 2014 vintage, both the Monfortino and the Francia bottling were sourced exclusively from the Cascina Francia vineyard. The grapes for these two wines are earmarked while they are still on the vine, with the vintage's very best grapes selected to become Monfortino. While the time of picking is identical for the two wines, the fermentation process is quite different. The biggest difference is while there is temperature control of the must with the Barolo Francia, the Monfortino is left to ferment with no temperature control, and also receives a slightly longer maceration. In fact, both cuvees are produced each year and kept separate until a determination is made - usually several years after the harvest - whether to release the Monfortino on its own, or to combine it with the Cascina Francia to make one wine. The Monfortino is only made if it is determined to be significantly different, both qualitatively and stylistically, from the rest of the Cascina Francia. With the vintage 2015 of Monfortino, for the first time, grapes from the Arione cru have been used in addition to the grapes from Francia. The grapes from Arione undergo the same process as explained above and all the cuvees are kept separately until the final blend (in the case the decision has been made to produce Monfortino).

In addition to the outstanding Baroli made by Giacomo Conterno, there is also Barbera d’Alba produced from both Cascina Francia and Cerretta. The Barbera are aged two years in large botti and are some of the most age-worthy and brilliant examples of this underrated grape to be found in Piemonte. Note: beginning with the 2010 Barolo and 2012 Barbera from Cascina Francia, the wines will be labeled as simply "Francia" in order to comply to the new standardization of Barolo cru' names across the region.

While there is a fourth generation of Conterno now potentially waiting in the wings, the legacy of this winery goes beyond the century of truly benchmark Baroli produced. Certainly, the Conterno family belong in the same visionary breath as Bruno Giacosa and Angelo Gaja in helping to create a market for fine Piemontese wines that can compete among the world's finest and most prestigious examples. Roberto himself has quietly and steadfastly pushed the limits of quality by focusing on perfecting minute details in the viticulture and winemaking process. First, the winery has experimental vineyards where various massale selection varietals, both new and old, are tested and evaluated for future use. In addition, the winery itself is a meticulous "laboratory" for creating the finest wines possible. No expense has been spared in equipment to be used for qualitative improvement. His de-stemmer, for example, is a one-of-a-kind machine that operates with ultra-precision to remove the entire green parts of the stems, often partially remaining on the grapes after de-stemming, which can create bitter tannins in the wines.

Roberto has also sought to eliminate one of the biggest scourges that face the Fine Wine market today, corked bottles. Working closely with both cork manufacturers and cork machine producers, he has developed a system that marks each cork with an identifying code to follow its efficacy and provenance over time. In addition, with the help of a unique machine he can not only detect the most minute traces of cork taint, but also find any tiny deviations in the cork's structure that could affect its efficacy as a closure. While only time will tell whether this system is 100% perfect, the goal is that Giacomo Conterno will be the first winery ever to fully eliminate corked bottles. A revolutionary concept, indeed!