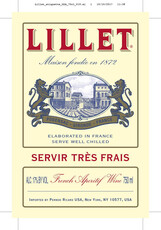 Est. 1872
Jean Lillet came from Saint-Morillon in Gironde and moved to Podensac, a small town near Sauternes in the Graves region, in 1680. His descendants Raymond and Paul Lillet, merchants of fine wines, liqueurs and spirits, founded Lillet in 1872. They created Bordeaux’s first and only aperitif, known as Kina Lillet until the 1970s when it became simply Lillet, a blend of Bordeaux wines and handcrafted fruit liqueurs produced in Podensac.

1920s and 30s
In the 20s and 30s, Lillet was served on very special occasions and at official receptions, soon becoming the aperitif in vogue all over the world. In 1937, Lillet’s first major advertising campaign was designed for the American market. The campaign by French artist Robert Wolff, better known as Roby’s, remains famous in the USA and France to this day.

1940s and 50s
After the Second World War, the small family-run company decided to focus on exporting the brand to the US market. Lillet became the star drink of every trendy New York bar. The Anglo-Saxon market really took off in 1945 with the launch of Lillet Dry, which could be mixed with gin or served in cocktails and inspired the famous Vesper.

1960s and 70s
In 1962, it was Pierre Lillet who expanded the range by adding Lillet Rouge, a stronger, ruby coloured alternative to its white counterpart, which appealed to Lillet fans and red wine lovers alike. In 1972 came the 1961 vintage “Lillet Vieux”. The brand was already called “Lillet” in the USA for customs reasons and Kina Lillet officially became Lillet worldwide.

1980s and 90s
The Lillet brand acquired a new lease of life on the French market in 1985 with the organisation of numerous tasting sessions in Bordeaux and Paris and a more modern and sophisticated design for the bottle. In 1995, Lillet won the gold medal at the International Wine Competition, confirming its quality once again. In 1999, Lillet became one of the 100 top-selling brands in France.

The 21st century has seen Lillet go from strength to strength, with ever more countries discovering the brand. Connoisseurs and mixologists ensure that Lillet features in all top cocktail bars around the world, leading to the launch of Lillet Rosé in 2011, which immediately won the Chairman’s Trophy at the Ultimate Beverage Challenge.