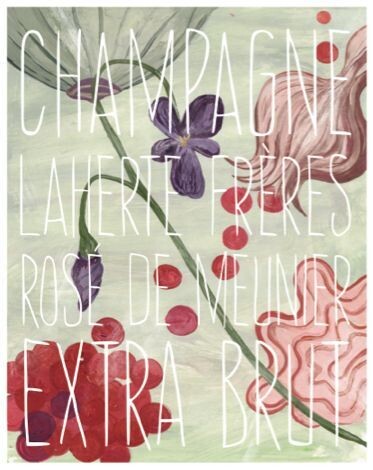 630646142545-base
$62.00
In stock
1
Product Details
Producer: Laherte-Frères
Style: Rose' Extra Brut Champagne
Grapes: Pinot Meunier
Vintage: NV
Vineyard: Sourced from vineyards with an average age of 25 years and more than 40 years for the parcels that are selected for the elaboration of the red wine
Location: France
Appellation: Champagne
Farming: Organic
Volume: 750ml

PUBLICATION
Vinous
RATING
94
DESCRIPTION
The NV Extra Brut Rosé de Meunier is dazzling. Rich yet focused, with superb depth, Laherte's Extra Brut Rosé is a magical Champagne in every way. Orange peel, sweet red berry fruit, cranberry, mint and chalk are some of the many aromas and flavors that develop as this breathtaking Champagne shows off its pedigree. This release is a blend of 2017 and 2016 that blends 60% Meunier (white), 30% Meunier (macerated) and 10% Meunier (still red wine). In a word: magical. Dosage is 2.5 grams per liter. Disgorged: March, 2020.

PUBLICATION
View from the Cellar – John Gilman
RATING
92
DESCRIPTION
The Laherte Frères Rosé de Meunier non-vintage Extra Brut currently on the market is a fifty-fifty blend of base years 2016 and 2015. Aurélien Laherte approaches this wine quite uniquely, as its one hundred percent pinot meunier composition is made of sixty percent wine made with no skin contact, thirty percent with a bit of maceration on the skins and ten percent is still red wine. This new release was disgorged in April of 2018 and finished with a dosage of 2.5 grams per liter. It is a deeper salmon color than many Rosés and offers up a lovely bouquet of cherries, blood orange, a nice touch of rhubarb, gentle smokiness, complex soil tones, a touch of meunier floral delicacy and a lovely topnote of spice elements. On the palate the wine is crisp, full-bodied, focused and beautifully complex, with a lovely core, excellent balance and grip, refined mousse and a very long, gently vinous and exquisite finish. This is outstanding juice. 2019-2040.

Aurélien Laherte is part of a dynamic generation of young vignerons making waves in Champagne and producing a fine array of terroir-driven wines using a natural approach to viticulture and winemaking. Along with his high school friend Raphael Bereche – another star in the region - Aurélien founded the “Terres et Vins” collective of producers back in 2009. This group taps some of Champagne’s more progressive and like-minded producers, including Agrapart, Marie-Courtin, Vincent Laval, Benoit Lahaye, among others. Each spring, the group holds a tasting in Champagne to showcase both the vins clairs of the previous harvest as well as their actual bubbly versions.

The notion of holding a tasting of vins clairs would have been unheard of 10 or 15 years ago, as these raw, screechy-acid wines can often be a teeth-chattering experience. But the progress in viticulture and winemaking has resulted in a new school of "vinous Champagnes” as well as a sea change in how the beverage itself is perceived. Alas, Champagne is, first and foremost, a wine!

The Laherte family has a long history in the region. Founded in 1889 by Jean-Baptiste Laherte, the estate was originally made up of vines primarily in the village of Chavot. Fourth generation vigneron Michel Laherte expanded the family estate which then covered about five hectares. With his wife Cécile, the two young vignerons modernized the press and tanks, but soon realized that too much modernity such as the use of herbicides and pesticides would prevent full terroir expression in the wines. They began working the soils, gently vinifying the juices, and remaining humble and patient as the wines developed. This philosophy is the foundation of the estate and has endured through the generations.

Today, under the direction of Aurélien Laherte who took over in 2005, the estate has become one of the most progressive and dynamic rising stars in the appellation. Like many of Champagne's top practicioners, the estate has begun to produce a series of tiny production, single-vineyard, single vintage cuvees (around 3,000 bottles each) from some of their most unique and expressive biodynamically-farmed parcels. These wines are all vinified in used Burgundy barrels, without malolactic fermentation, and are bottled without fining and filtration. They are then finished with little or no dosage so as to not mask the individuality of the underlying terroirs.

But the mainstay of the Laherte range is the Ultradition lineup consisting of Brut, Extra Brut and Rosé. Aurelien knows that these flagship cuvées are the introduction to his family's estate and to the village of Chavot, and thus, need to reflect quality and extreme value. The introduction of the racy and mineral-driven Blanc de Blanc Brut Nature (from his chalkiest soils in and around Chavot) and the bright and thirst-quenching Rosé de Meunier -- both with fanciful, floral labels -- are a nod to the dynamic direction in which Aurélien has taken in the last decade.

The Laherte vineyards are situated largely in the Côteaux Sud D'Epernay, an interesting sub-region sandwiched between the Cotes des Blancs and the Vallee de la Marne, with pockets of soils that greatly resemble these two fine and geologically diverse regions. The vineyards themselves total 10.5 hectares (over 75 separate parcels), seven of which are farmed biodynamically and certified organic, with the rest farmed either 'uncertified organic' or at least sustainably. Because the family property has been parcelled out among aunts, uncles and cousins throughout the 20th and now the 21st century, Aurélien and his parents decided to register as a negotiant so Aurélien could incorporate all family fruit into his blends. This was the best way to contend with complicated French inheritance laws and keep the estate whole.

Great lengths are taken to ensure each vine fully expresses itself and the underlying terroir. A team of ten, including aunts, uncles, and cousins, works throughout the year (in accordance with the lunar calendar) to employ techniques such as plant infusions to improve the vine’s natural defense system, and high foliage to encourage photosynthesis and thus, balanced maturity. Aurélien and his team are now beginning to experiement with more consistent cover crops of both indigenous and sown plants, and they are reducing the amount of plowing to minimize soil disturbance in hopes of building and keeping soils rich in microorganisms. Given the diversity of soils and expositions, the three major grape varieties of Pinot Noir, Meunier and Chardonnay all thrive and are planted on the southern slopes of Epernay in the villages of Chavot, Epernay, Vaudencourt, Moussy and Morangis. The family also has some 1er Cru Chardonnay vineyards on the famed Côte de Blancs in the villages of Vertus and Voipreux. And finally, more Meunier plantings are found in the villages of Le Breuil and Bourgault in the Vallée de la Marne, often referred to as Meunier country.