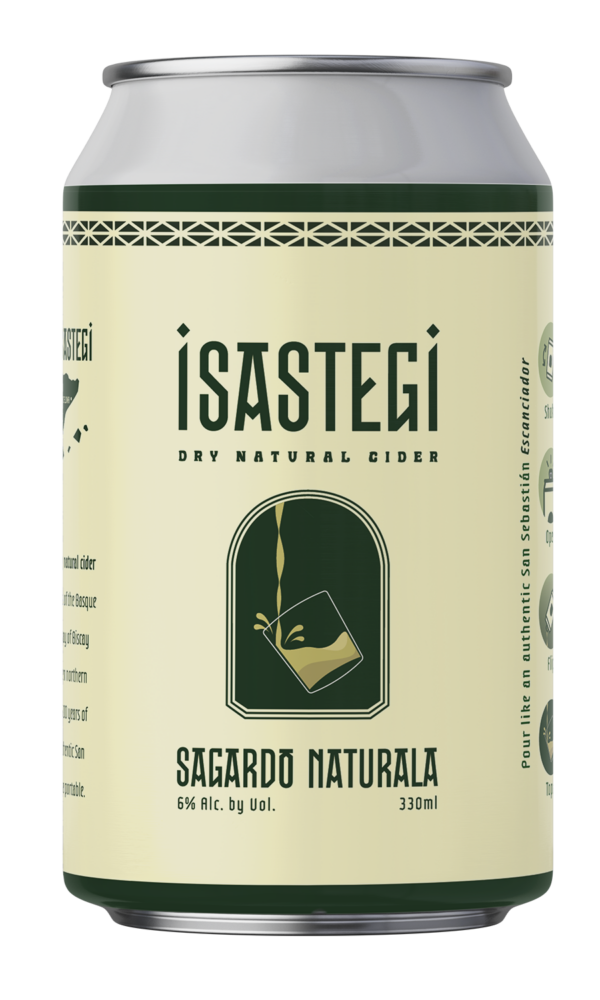 Cider has been produced at the Isastegi farm since the 17th century as cider is an integral part of the Basque culture, where it is an everyday drink. Isastegi transcends the cider category, crafting a unique product born of the experience that comes from practices transmitted from generation to generation, paired with innovation. Isastegi cider is produced exclusively with organically-grown, native Basque apples farmed within a 15-kilometer radius of their cider house in Tolosa, in the countryside outside of San Sebastián.

Isastegi is also a founding member of the Gorenak Society and Euskal Sagardoa, a new PDO for Basque natural cider. It was created in 2017 and allows the use of about 115 local apple varieties grown in the Basque Autonomous Community. It certifies both the quality and origin of the apples and cider. Isastegi has also recently gained organic certification by ENEEK (Basque Organic Regulatory Council) and does not add sulfites to their cider at any point during the process.

Basque Sagardo is traditionally served cold, poured into a wide-mouth tumbler from an arm’s length a little bit at a time to give the cider its signature creamy, effervescent mousse.

Vinification – Each lot is fermented separately in stainless steel tanks with native yeasts. After fermentation, each component is tasted for quality, and the lots are blended together in kupelas (old, large oak cider barrels) for several months. Isastegi cider is bottled fresh from barrel without fining or filtration before each shipment.

Cider has been produced at the Isastegi farm since at least the 17th century.

The estate was originally covered by pastures for cattle, with only a few apple trees for the family to make a small amount of cider for themselves and neighbors. In 1984 Migel Mari Lasa, with the help of his father Joxe Mari, decided to switch from livestock to cider and began selling their cider to the public. Pastures were replaced by orchards planted with native Basque apple varieties and the house became dedicated to cider production. The third generation at Isastegi is innovating and advancing the quality standard of the previous generations.

The ecosystem around Isastegi is made up of high-quality apple orchards and all of the apples which go into Isastegi are from orchards within a 15-kilometer radius. This is an important distinction, as less scrupulous producers making cheap cider for the bulk market often rely on frozen apple must concentrate purchased cheaply from other countries with no quality standards, fermented in their cider house, and served to unknowing tourists. There is more demand for cider in Spain than there are apple orchards, so it has created a system where the importation of foreign apple must for cider is common. This is one of many points that sets the production at Isastegi apart from the competition.