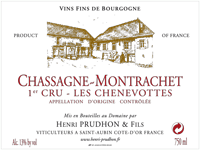 From the lieu-dit in the most northern sector of Chassagne, bordering Puligny and close to the Grand Cru Criots Batard Montrachet. The vines here are 40 years of age (as of 2011) and have a south-southeast exposure. The wine is aged on the fine lees for twelve months (sometimes more) before bottling. It is an ample and persistent wine that ages particularly well.

From the Importer Neal Rosenthal,

We have the special privilege of working with the Prudhon family virtually from the first moment when they decided to bottle their wines rather than sell their grapes and/or wine to negociants. Our first vintage together was 1983 and we have worked in comfortable partnership ever since, neither missing a beat nor a vintage.

The domaine was established by Henri Prudhon who was born and raised as a vigneron in the village of Saint Aubin since his birth in 1921. He and his wife, Marguerite, combined forces upon their marriage in 1945, putting their small vineyard holdings together to form the Domaine Henri Prudhon. Monsieur Prudhon was a force in his village, serving for many years as the Mayor of this lovely hamlet set just to the west of Puligny and Chassagne along Route Nationale 6. Their son, Gerard, born in 1949, joined the family enterprise and it was Gerard who decided, in the early years of the 1980s, to begin bottling the wines of the estate rather than selling off the fruits of their labors to the local negociants. Gerard, too, maintains the family’s interest in the affairs of the village, being elected multiple times Mayor of Saint Aubin. Gerard’s two sons, Vincent and Philippe, have now taken over the direction of the domaine, working under the watchful eye of Gerard who has instilled in his children the deep respect for the finest of Burgundian traditions.

We had the good fortune of appearing on the scene simultaneously with the expansion of the domaine and the decision to bottle and market the wines at the estate. Thus, the Prudhons have been our principal source for the wines of Saint Aubin from the outset of our career. Fortunately, Gerard Prudhon also increased the family holdings and expanded into the neighboring villages of Chassagne Montrachet and Puligny Montrachet which enabled us to increase our coverage in this sector of the Cote de Beaune. It is a particular pleasure to work with the Prudhon family. Their vineyard holdings in Saint Aubin are significant and, as a result, working with virtually the entire range of their wines enables us to develop a profound understanding of the tantalizing terroir of Saint Aubin and to display it in both red and white wines. If one bemoans the fact that so much of Burgundy is dear, then one has only to settle into this delightful geographical niche of Saint Aubin and indulge in the wines of this modest but oh-so-competent family to discover exceptional value.

The domain encompasses 14.5 hectares of vineyards and produces on the order of 90,000 bottles of wine annually, eighty-five percent of which is exported outside of France. The vineyards are managed with the objective of intervening as little as possible in the natural vegetative cycle. The vines are planted to a density of 10,000 per hectare; the Chardonnay is pruned in the Guyot fashion and the Pinot Noir follows the Cordon de Royat method. Harvest is manual and the objective of the domaine is to collect grapes when they achieve a balance, as perfect as possible, between sugar and acidity. At harvest, the white grapes are pressed in a pneumatic pressoir and then are racked into barrel to undergo both fermentations: alcoholic and malolactic. The cellars at the Prudhon domaine are quite cool and the fermentations usually extend for a long period of time. The reds are destemmed and experience a cold maceration of just a day or two; then, the alcoholic fermentation proceeds for an additional ten to twelve days with pigeage and remontage occurring throughout, although the Prudhons purposely do not seek to achieve a “super-extraction” preferring to express the finesse and complexity of their particular terroir. Very little new oak is used when aging the red wines; the percentage of new oak on the white wines depends on the particular cuvée with specific reference to the structure of the wine and the quantity produced; as little as 10% new oak may be used but no more than one-third is ever utilized.