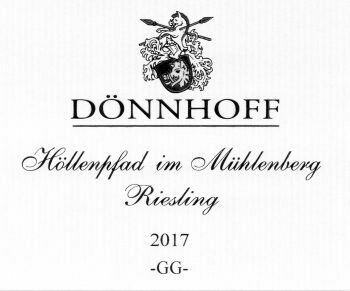 SKU 2151163
$69.99
In stock
1
Product Details
Rated 98 by James Suckling
The mystery of ancient herbs takes this concentrated and racy dry riesling up to another level. Old-vine concentration, but also the almost supernatural brightness and austerity of high-altitude, windy sites. Seemingly endless minerality at the finish. From organically grown grapes with Fair'n Green certification. Drink or hold.
Rated 94 by Wine Advocate

Tasted as a sample in April 2020, months before the bottling, the Roxheim 2019 Riesling GG Höllenpfad Im Mühlenberg opens very pure, elegant and coolish on the flinty, refined, very well articulated and precise nose. Full-bodied yet super fine, crystalline and salty on the palate, this is a linear, piquant and elegant yet tensioned Höllenpfad with very good length, intensity and complexity. Highly promising.

Famous, steeply sloping vineyard in a small side valley of the middle section of the Nahe River. The “Höllenpfad” (“Path to Hell”) name is an old one, likely referencing both the vineyard‘s steep slope as well as the unique color of the red sandstone. The surrounding landscape is bathed daily in the rich, warm light of the evening sun as it reflects off the hillside‘s distinctive red soil. It‘s also not hard to imagine that the word „Hell“ might have been uttered by many a winegrower after a particularly laborious day on these steep slopes. The weathered warm sandstone of the Rotliegend strata lends the wines their inimitable character. Grapes grown here tend to be very small with intense, nuanced aromas; the resulting wines are elegant with a spicy mineral fruit and excellent aging potential.

The loess loam soil of the Krötenpfuhl vineyard is notable for its high share of gravelly quarzite. Between the stony ground and its southern aspect, this neighbor to the Kahlenberg is known for warm soils and early flowering of the vines year after year. The loess loam substrate retains water well, ensuring the vines have sufficient moisture even in drought years. Vines growing in this type of pebbly soil tend to produce small berries with delicate aromas, a lively acidity and a long hang time