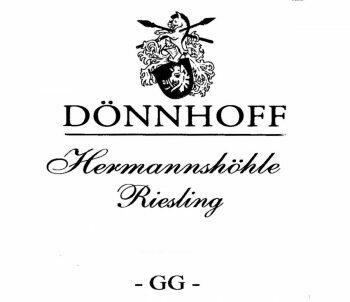 Niederhaüser Hermannshöhle (clay-slate with limestone and volcanic veins) is the most famous vineyard in the Nahe. Regarded as the benchmark site for the region for over one hundred years, this 8.5ha conical-shaped hillside of slate, with bands of volcanic soil and limestone, rises up over a slight bend in the Nahe. It’s the crown jewel of all vineyards in the region. Dönnhoff’s wines are a shining example of what this site can produce, from the delicious Spätlese to the concentrated, yet electric Auslese ‘Goldkapsel’and the stunning Grosses Gewächs. “Hölle” means “hole” and the name “Hermann” is likely derived from Hermes, the messenger of the gods and patron of travelers. If Felsenberg is the god of thunder, then surely Hermannshöhle is the god of wisdom.

Describing the flavor of the wines from Hermannshöhle is probably best left to a taster who has yet to experience the wine; after tasting wines from this vineyard several times, the descriptions become quickly replaced with metaphors.

Several years ago Cornelius was asked by an excellent young taster who was traveling with us “what are the markers for Hermannshöhle?” Cornelius waited a beat and said,

It tastes like Hermannshöhle. And I am not saying this to be an asshole or not to give you a real answer. The truth is that the wine in your glass I have tasted maybe 300 times already. I tasted the fruit as it matured on the vine until I was ready to pick it. I tasted it as the juice ran out of the press. I tasted it in barrel when it was fermenting and all the way through fermentation until the barrels finished. Then, I tasted each barrel over and over to decide what the final blend would be.

When the wine is finally in bottle, I will have tasted it so many times it feels just like a place in time. When I taste this wine, I am tasting the conditions of that particular vintage; I can feel the cold of springtime and the warmth of summer. I can feel the rainfall in late summer as the seasons changed to fall and the grapes ripened.

To me, the taste of this wine is so linked to the place and the feeling that it is indescribable. It’s really difficult to separate these things and to say ‘Hermannshöhle tastes of white peach and grey salt’. It doesn’t work that way in my mind. The wine isn’t about an aroma or a fruit flavor, which fades with time. It is about the feeling of the place”

For over 100 years, the Hermannshöhle has been revered as the Nahe‘s top-ranked site and the benchmark by which all other vineyards in the region are judged. It takes its name from a small mine, or “Höhle”, in the middle of the hillside. “Hermann” is derived from Hermes, the Roman god of messengers and travelers, and the name likely hints at an ancient place of worship once located here. This site faces due south and lies 130 –175 m above sea level. Its soils are primarily blackish gray slate mixed with extrusive igneous rock, porphyry and limestone. For generations, this marvelous site has shaped our expectations for what fine wines from the Nahe can achieve.

A perfect, steep southern slope with soils consisting of blackish grey slate and volcanic elements, extremely rich in minerals. The stuff of legends, for over 100 years this has been the most lauded site in the entire Nahe wine growing region.

The Dönnhoff family first came to the Nahe region 250 years ago, establishing a traditional farm in the village of Oberhäusen an der Nahe, which included livestock and vegetable gardens in addition to some grape growing. Oberhäusen and this part of the Nahe river valley is very pastoral; it feels far away from the relative hustle and bustle of the Rheingau and wine tourism. The countryside is serene and beautiful, marked by steep hillside vineyards in the succession of villages following the river from Norheim to Niederhausen, through Oberhäusen, ending in Schlössbockelheim.

The estate was started by Helmut Dönnhoff’s grandfather, Hermann, in the 1920s. Helmut took over from his father, Hermann Jr. in 1966; at that time there were only four hectares under vine and still quite a bit of farmland, which was rented out. In 1971, the farmland was sold and Helmut turned his full attention to producing quality wine.

Helmut is a very instinctive winemaker with a natural touch that he’s clearly passed on to his son Cornelius, who joined him at the winery 2007. The Dönnhoffs believe in craft and workmanship with the understanding that “winemaking alone cannot bring quality; it can only retain the available quality.” In the 40+ years that have passed since Helmut began his work some things have changed and shifted, but the commitment to excellence and transparency above all has remained constant from one generation to the next.

The Estate has grown to 25 hectares but both father and son feel that this is as large as they want to be; more growth would mean less time in the vineyards and cellar, where they feel most at home and in their element. Cornelius is as thoughtful as his father and the two share the same view on winemaking, viticulture, and taste in wine; balance and “Das ganze ding muss klingen – The whole thing must be sound” are at the center of their philosophy.