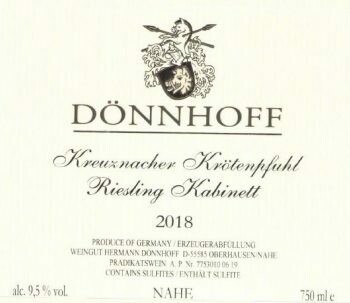 The loess loam soil of the Krötenpfuhl vineyard is notable for its high share of gravelly quarzite. Between the stony ground and its southern aspect, this neighbor to the Kahlenberg is known for warm soils and early flowering of the vines year after year. The loess loam substrate retains water well, ensuring the vines have sufficient moisture even in drought years. Vines growing in this type of pebbly soil tend to produce small berries with delicate aromas, a lively acidity and a long hang time.

Kreuznacher Krötenpful (loess, loam, and quartzite) is a site that Dönnhoff produced just a single wine from for many years. “It’s a really nice site for Kabinett, making a riper wine than Leistenberg, but with great acidity still”.

The vineyard sits just behind the town of Bad Kreuznach, a quartz-rich hilltop plateau with a steep, south-facing section, angled towards the village. In 2017 Cornelius produced Krötenpfuhl Grosses Gewächs for the first time when frost reduced the crop and concentrated the always small berries here even further.

The GG is made from the steepest section of the vineyard and feels open and charming. It is the most approachable of the GGs in its youth. The spicy and bright Krötenpfuhl Kabinett comes from the quartz-rich plateau and while it’s not quite as saline as the Leistenberg, it’s extraordinarily drinkable.