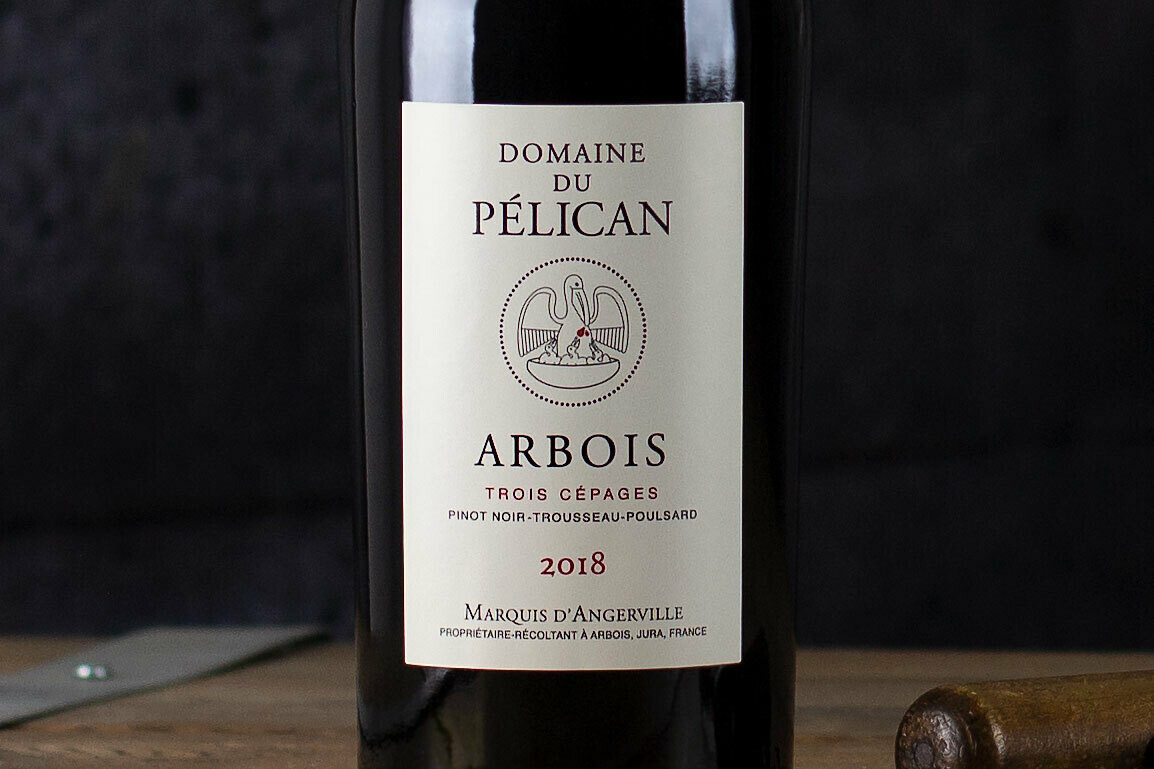 When the first vintage of this wine was released, in 2012, it was momentous: The third-generation proprietor of one of Burgundy’s most prestigious estates, Domaine Marquis d’Angerville in Volnay, was debuting a Pinot Noir-based blend from vineyards he had acquired in the Jura’s Arbois AOC. This was big.
Now, it’s not that the Jura didn’t already have plenty of excited buzz around it, or its own legendary producers to celebrate—Jacques Puffeney, for example, or Stéphane Tissot, to name just two (more on both below). But for someone from the toniest precincts of Burgundy to not only acknowledge the Jura as a great terroir but to aspire to own land and make wine there, well, that took the excitement level and the international attention to another level. Before COVID-19 took restaurants from us, the wines of the Jura—reds and whites alike—were on the lips (and in the glasses) of every sommelier in town. Once mostly thought of as a source of oxidative whites made in a very similar manner to Sherry, the Jura, whose limestone-rich soils strongly resemble those of Burgundy, is home to a thrilling range of whites and reds that rival those of Burgundy. Minerality, aromatics, finesse…these are the qualities that first attracted Guillaume d’Angerville to Arbois, and this polished and exquisitely aromatic red has become a regional reference point in relatively short order. If you’re not already on the Jura train, “Trois Cépages” is here to welcome you aboard in high style. Don’t miss this!

Monsieur d’Angerville was having lunch with his wife at Michelin-starred Taillevent in Paris, where he and the sommelier had a ritual: The sommelier would bring him a wine to taste, blind, the only stipulation being that it had to come from somewhere other than Burgundy. On this fateful day, d’Angerville tasted the wine served to him and thought the sommelier had forgotten their agreement; he was certain it was Burgundian Chardonnay. But no! The sommelier returned with the bottle: a 2005 Arbois Chardonnay from Stéphane Tissot.

Not long after that, d’Angerville went on the hunt for vineyard land in the Jura (which, as we’ve noted before, is only about an hour east of Beaune by car, but, for an entrenched Burgundian like d’Angerville, might as well be the other side of the world). With the help of Marquis d’Angerville estate manager, François Duvivier, and geologist Yves Herody, he eventually acquired five hectares of biodynamically farmed vines in the hamlet of Montigny-lès-Arsures, in Arbois—closing the sale right before the 2012 harvest. He has since added to his holdings in the region, including four hectares of vines acquired from the legendary Jacques Puffeney, who retired in 2014.

Named for the Jura Mountains, a sub-Alpine range running near France’s border with Switzerland, the Jura’s soils are composed of limestone-rich marl dating to the Jurassic period. “Trois Cépages,” as its name indicates, is a blend of three grapes—Pinot Noir (60%), Trousseau (35%), and Poulsard (5%)—from vineyards in Montigny-lès-Arsures, which range in altitude from 300-400 meters and face south-southwest. Aged in a 50-50 combination of mostly used Burgundy barrels and larger foudres, this 2018 is a crash-course in the ethereal aromas and sneaky persistence of Jura red wine.

If you have any experience with the very fine, firm, aristocratic Volnays of d’Angerville, you might notice a through-line to the 2018 “Trois Cépages,” but overall, you’ll find this a more softly contoured, floral, gently tannic—and considerably more affordable—cousin to the d’Angerville Burgundies. In the glass, it’s a bright ruby-garnet moving to pink at the rim, with a beautiful, brambly tangle of just-picked raspberries, wild strawberries, orange peel, tea leaves, wild herbs, underbrush, and subtle baking spice. It is medium-bodied and as soft as a high-thread-count cotton sheet, but with the perfect level of freshness lending a lip-smacking tang. Serve it slightly cooler—say cellar temp, around 55 degrees—in Burgundy stems and you’ve got the world’s most sophisticated picnic wine on your hands. Just don’t mistake this wine’s effortless charm for simplicity—it will linger in your memory long after the bottle is gone, so stock up accordingly. It will bridge the “fish versus meat” divide like few reds can, perfect for the Summer ahead.
Save this product for later
Display prices in: USD