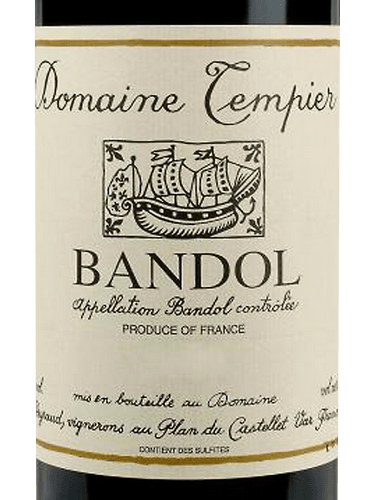 Remarkably fresh and approachable for a region known for brawn. Perfectly balanced, delicious with a slight chill; wonderfully perfumed of sandalwood and spring blossoms.

Of all of the domaines we represent, no other serves more as our cornerstone, stands more in the defense of terroir, and is more intricately interwoven with our own history, than that of the iconic Peyraud family of Domaine Tempier. The pages that Kermit has written about them alone rival those of his dear friend, Richard Olney, who wrote the definitive history of the domaine and was the first to introduce Kermit to the family in 1976. Their story might be considered mythic if it were not true.

When Lucie “Lulu” Tempier married Lucien Peyraud in 1936, her father gave them Domaine Tempier, an active farm that had been in the family since 1834, near Le Plan du Castellet, just outside the Mediterranean seaport village of Bandol. Tasting a pre-phylloxera bottle of Domaine Tempier Bandol (a wedding gift from his father-in-law) inspired Lucien to research the terroir of Bandol extensively. Up until that point, old vineyards planted with Mourvèdre had been systematically replanted to higher-yielding varietals. However, more research not only showed its historical roots to the area, but the grape proved to be more resistant to oxidation, producing wines with great aging potential. By 1941, with the assistance of neighboring vignerons, Lucien worked with the I.N.A.O. (Institut National des Appellations d’Origines) to establish Bandol as its own A.O.C. Needless to say, large-scale replanting of Mourvèdre ensued, and Bandol now requires a fifty percent minimum in all reds. Lucien will forever be celebrated as the Godfather of Bandol, but also as the man who revived Mourvèdre to its former glory. Raising deep and structured wines of such refinement and longevity has made Domaine Tempier truly a grand cru de Provence.

Lulu and Lucien raised seven children, and nourishing family, friends, and wine lovers at table is a regularly celebrated tradition at the domaine. Much of that is attributed to Lulu, the beautiful, Marseillaise materfamilias who has carried on the great Tempier family ritual of serving guests fresh, cool rosé, hearty, soulful reds, and copious amounts of delicious homemade Provençal cuisine. Her traditional hearth cooking has attracted attention throughout France, even bringing Alice Waters over from California to learn in Lulu’s kitchen. When Lucien retired, sons François and Jean-Marie shared management of the domaine with François in the vineyards and Jean-Marie in the cellars. The two made a formidable team. Though Lucien passed away in 1996, and his sons have now since retired, the torch has been passed to the young, energetic, and talented Daniel Ravier, who has just the right savoir faire to carry on the great tradition and style of the domaine.

Beyond our affection and the enduring bonds of our friendship, objectively the celebrity of Domaine Tempier also lies deep in the soils of Bandol. Variations of clay and limestone soils between the vineyards produce wines that are undeniably world class. Whether it is the cult following they have established through their refreshing, age-worthy rosé (once praised by Robert Parker as the greatest rosé in the world), their Bandol Blanc, or the distinctive cuvées of Bandol rouge, the wines of Domaine Tempier stand as the proud benchmark when talking about Provençal wines. Through their passion, pioneering, and advocacy for Bandol, the Peyrauds have become legendary. We are fortunate to have their wines serve as the flagship of our portfolio, and even more grateful to have the Peyrauds and their extended family as cherished friends. If any wine can be said to have soul, it’s Tempier.