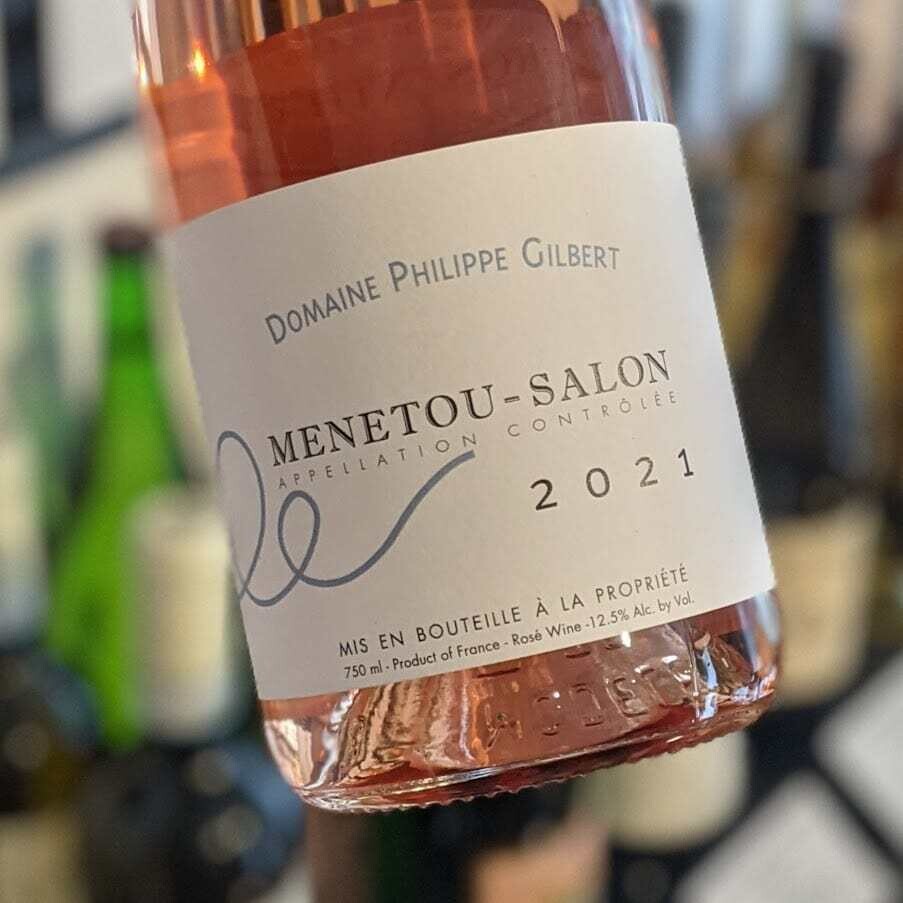 Philipppe Gilbert's rosé, sourced from vines in Parassy, is replete with a sense of vinosity that is nearly outside category. The thing that really thrills in this wine is its energy, a bracing kinetic drive that feels like biting into cool, fresh, ripe fruit right off the vine.

This Rosé is vinified using the direct press method following the same principles as the process used for making the white wine. Obviously, it is 100% Pinot Noir and the grapes are sourced from the Clos des Morogues. Approximately 3600 bottles per annum are set aside for our use in the US market.

The story of the Domaine Philippe Gilbert gives splendid evidence to the fact that our world of wine is endlessly fascinating and encompasses more than the technical aspects of growing grapes and turning them into wine. Philippe Gilbert was a dramaturg, producing and also writing plays for the theatre. In fact, one of his creations, a poetic and philosophical contemplation of the horrors of the Srebrenica massacre in Bosnia, was performed in the States. He is, then, a vigneron with a unique background. Nevertheless, he is very much the vigneron, having returned to take over the direction of his family domaine located in the hamlet of Faucards in the midst of the Menetou-Salon appellation. Having traveled the world and explored the intellectual side of the arts, Philippe still felt the pull of the soils that his father worked for many years, recognizing that, as his father prepared to retire, the domaine would no longer exist as it was without his participation. This is all understandable once it is understood that a certain Francois Gilbert turned from being a tavern-keeper to establish this domaine all the way back in 1768.

His return reinvigorated this domaine, one of the largest in the appellation with its twenty-seven hectares under cultivation. With the assistance of his colleague, Jean-Philippe Louis, Philippe Gilbert has plunged headlong into the system of biodynamic viticulture and the domaine is now certified as an organic producer. The vineyards are scattered throughout the heart of the appellation in prime sectors of the villages of Menetou-Salon, Vignoux, Parassy and Morogues. The soil is a classic mix of clay and limestone that sits on the famous kimmeridgian basin that extends from Menetou through Sancerre and Pouilly-sur-Loire to Chablis and Champagne. This informs the wines of Menetou-Salon and makes them, at their best, intensely mineral with formidable persistence on the palate. The appellation itself covers a mere 470 hectares in a narrow band five kilometers wide and twenty-five kilometers long (from Pigny to Humbligny) and only Pinot Noir and Sauvignon Blanc are permitted to be planted to qualify for the appellation. The micro-climate of Menetou-Salon is marked by warm days and cool nights which permit the grapes to develop proper sugar levels while maintaining excellent acid balance.

In the village of Parassy, there are three separate parcels: La Montaloise and the Clos du Bourg are both planted to Sauvignon Blanc and the parcel of Les Treilles, with its full south exposure and planted to the oldest vines of the domaine (both in Pinot Noir and in Sauvignon), which is the source for the Renardieres cuvées in white and red … the prestige bottling of the domaine. Finally, there is the Clos des Morogues, composed of 4.6 hectares of Pinot Noir, and situated at the ancient walls of the medieval village of Morogues.