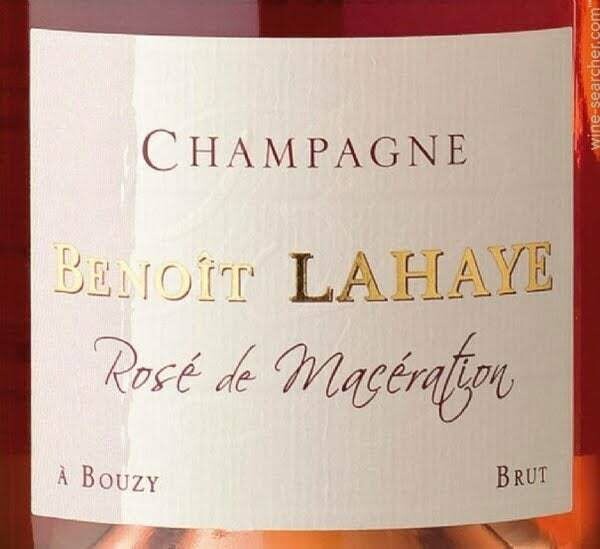 Champagne Benoit Lahaye “Rosé de Maceration Les Juliennes” Extra Brut
100% Pinot Noir from Les Juliennes, a vineyard located on the terres blanches (white soils) in Bouzy on the border with Tauxières, planted in 1973. Whole cluster maceration for 2 to 3 days, then direct pressing of the grapes. The still wine is racked once and not filtered before its secondary fermentation. Low dosage at 2-3 grams/liter (extra brut). Production is around 4,000 bottles. Its fresh, inviting acidity perfectly balances the bright red fruits (raspberry, cherry) it generously offers up.

Bouzy, Montaigne de Reims
Benoit Lahaye is located in Bouzy, a grand cru village in the Montagne de Reims. His family has been making Champagne there since the 1930’s, and today he works in the winery with his wife Valérie and their 2 sons. The domaine, which covers a surface area of 4.8 hectares, is situated in the regions of Bouzy (3.2 hectares), Ambonnay (1 ha) and Tauxières (0.6 ha). Bouzy brings structure, power and fruit to the wines while Ambonnay brings acidity and roundness. The estate is mainly planted with Pinot Noir (just under 90%) on south- and southwest-facing slopes. The vines average 35 to 40 years old. The total production is less than 40,000 bottles per year.

Lahaye uses only his own compost and organic manure to enrich his soil. Various herb infusions are also applied, along with other fermented extracts from plants and essential oils in order to combat plant disease. Since 2009, Lahaye has also been applying biodynamic principles to further improve the expression of his terroir and reveal the full potential of his soil and vines. He says that the switch to biodynamic practices has brought higher potential alcohol at harvest, but also higher acidity. His 9-year old work horse Tamise, who became part of the family in 2010, leads Benoit around the vineyards, plowing the soil and spreading compost.

In 2010, the estate was certified biodynamic by Biodyvin.
In the cellar the work is as minimal as possible. The major part of the vinification is achieved in 225-liter barrels, without any chaptalization and using only natural yeasts. The wine spends 10 months on its lees without racking. All the wines go through 100% malolactic fermentation—with the biodynamic practices, Lahaye is not afraid of losing too much acidity but, more than anything, he is against stopping the malolactic by adding sulfur. The barrels are in a new above-ground chai that has large windows so that the wine sees the seasons before being put in bottle.

Since the 2012 harvest, all wines at the domaine have been fermented in barrel. Following the biodynamic calendar, they are all bottled on a fruit (or perhaps a flower) day. All the bottles are rotated with gyro-palettes because, according to Benoit, “all the work to be done in the vineyards leaves little time for manual riddling.” Since 2008 Lahaye has also been experimenting with making wines entirely without sulfur, and now bottles a sulfur-free cuvée called Violaine.