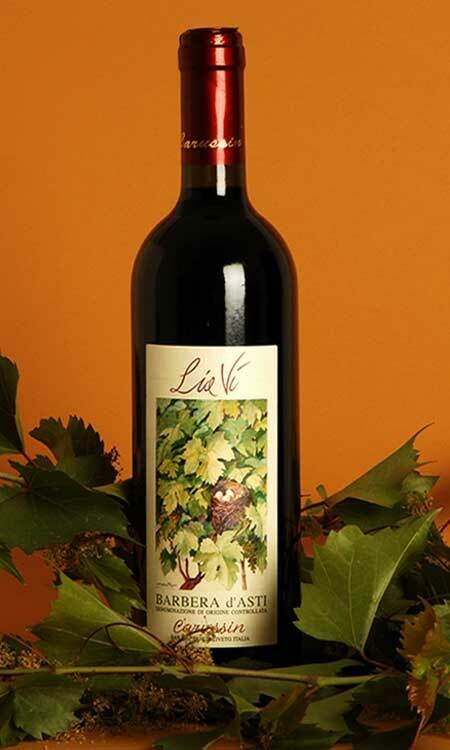 Vineyards: Town of San Marzano Oliveto. Pruning system is Guyot. Planted in the year of 1981.

Harvesting: Manual harvesting with baskets, followed by analysis of maturation, generally in the fourth week of September.

Ruby red with shades of purple, intense and complex fragrance of cooked fruit with evident scents of cranberry, cherry and prune. It has energic tasting impact, while flavor develops with elegance and continuity.

Lia Vì is made with soft pressing, controlled fermentation and average maceration, wine is pumped over circa 3 times a day, wine becomes steady naturally during ageing. Short ageing in concrete tanks. Longevity: 10 to 12 years.

Lia Vì is the characteristic Barbera d’Asti, young, intense and fun. Its name was born from the research of the various natural bird nests, compared to the other vineyards, that are found in its vineyard in the period of pruning. After a research lead by technicians, it was concluded that those nests are made by a migrating bird that stops by that vineyard during its rout. The technical name of such species is Muscicava Parva, in Piedmontese dialect it is Lia Vì.

It is a wine that pairs with important entrances, spicy first dishes or light second dishes.

In the vineyards: Matteo and Luigi Garberoglio. In the cellar: Luigi and Luca Garberoglio.

Certified organic, from a single vineyard of 45-year-old vines that has been farmed organically for four decades and biodynamically for over a decade. Native yeast fermentation, unfined and unfiltered, sulfur at bottling is the only addition to this wine. Lia Vi means “little nests” in Piedmontese dialect. It’s the front yard of Luca, Matteo, Bruna and Luigi’s house/winery in San Marzano Oliveto. After years of organically farming this field, it has become notably alive, full of birds and bugs and worms and small critters: hence the name Lia Vi, to recognize it’s healthy diversity of residents.