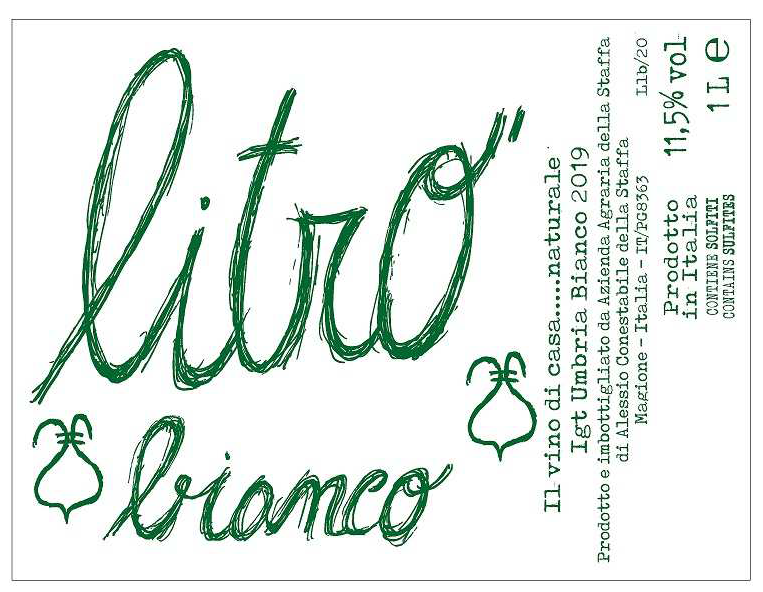 VINICULTURE: Macerated on the skins f or two days with spontaneous fermentation and aged in fiberglass tank without temperature control, sulfur additions, fining or filtration at any time. Bottled in clear glass liters under crown

The story of Danilo Marcucci is not a simple one. He's not famous, doesn't seek the limelight, and yet is behind perhaps the most important and influential producers that is the greater Italian Natural Wine Movement.

Danilo is not a just a winemaker. He's a visionary, an enabler, a wealth of knowledge and experience gleaned from over 20 years of viticulture and cellar work. Marcucci didn't grow up in a 'winemaking' family, in the sense that his parents and grandparents indeed made wine, but it was for themselves, from their land and grapes...'vino contadino', farmer wine. As old fashion and simple as it gets.

As a young boy Danilo can remember watching and helping his rugged, Umbrian grandfather make the wine in the old fashion way...yet something was missing. During the post-World War era even 'vino contadino' had been infiltrated by 'modern' manipulations and shortcuts; selected yeasts, sulfur dioxide tables, chemical pesticides and fertilizers. All of which were sold dubiously to the hard working old-timers in their small vineyards while being guaranteed that the results of the wine would be the same but the labor it took to make it would be half...easy to see why people chose the easy way out...it's human nature.

Over a decade later, as an early 20 something, Danilo found himself once again entranced by wine. Captivated by the growing openness of 'International' producers...wine from France and northern Europe began becoming available in Italy for the first time in any tangible way. Danilo was in love, but not for long. He too was eventually let down by the amount of additives and correctives being used in what were being sold to him as 'the greatest wines in the world (ie Burgundy, Bordeaux, Champagne, etc). He needed to change something and he wanted to take action.

Determined to learn the secrets of 'true wine', 'real wine', 'natural wine', or whatever we call it these days, Danilo set out visiting some of the most mythic 'masters' of the old guard of Italian wine. Often times these were names and producers that only a few dedicated consumers knew of, truly cult producers. Remember; no internet, no Instagram, no publicity. Often just word of mouth is how the lore of these producers was transmitted. Today some of Danilo's great masters (Valetini, Maga, Cappellano, Massa Vecchia, Maule, Mattioli) are enjoying the limelight, but 20+ years ago they were almost complete unknowns. This was the foundation of Danilo's formidable experience.

Guided by his vision Danilo began his next project. Find producers, families, pieces of land that had immense potential, yet that potential was being unrealized. First, Danilo turned to his family's generation's old neighbor in the Colli Martani of southern Umbria. There he found the Mattioli family of the tiny but extremely well respected Collecapretta winery. He learned the ways of completely natural winemaking hand in hand with Vittorio Mattioli. From farming with only compost produced by their own farm animals, to pruning the vines to vinifying without temperature control, added yeast, enzymes...nothing. The wines were the purest he'd ever known and they served as an inspiration and a starting point for expanding his vision of natural wine with a fierce sense of local tradition, hyper-regionalism.

From here Danilo's journey slowly took more shape. Firstly with the alpine wines of Matteo Furlani, a young and excited producer of sparkling wines in the high Dolomite's of Trentino. Together they mastered the techniques of natural bottle fermentation, eschewing the modern technology that had taken hold of the valley below. Today Furlani is considered among the best producers of bottle fermented frizzante wines in Italy, maybe anywhere.

Next (circa 2006) it was to the southern Adriatic coast of southern Abruzzo, where Danilo had spent years learning the lands and wines of the late Eduardo Valentini. There he found an inspired woman, Iole Rabasco, at the helm of her father's commercial winery. They had all the right pieces of land, but their winemaking was completely conventional at that point. Something had to change. Together with Danilo's vision and Iole's courage, they sold off all the 'modern' winemaking technology in the winery, leaving only the old basket press, cement tanks and some 54 liter damijohns....materials you would find in a winery from the turn of the last century, and nothing more. Today, Iole is making some of Abruzzo's purest and vibrant expressions of wine; truly one of very, very few in her region, she's a true pioneer.

Now, Danilo is Umbrian...through and through. It's important to understand what being Umbrian means if you're going to understand who Danilo Marcucci is. First off, the region is, and has always been, a place of tremendous tranquility. Tied closely to the ancient and holy Roman Empires. The mighty Tiber River flows directly through Umbria, a fertile valley providing important agricultural land for millennia. It's also a tiny, poor, land-locked region where trade and contact with the outside world has historically not existed. It was a land owned and operated largely by monasteries and cloisters, not noble Dukes and wealthy merchants like their neighbors to the north in Tuscany. This all adds up to an Umbrian paradigm that is known for being suspect of outsiders, reserved and quite, resistant to change. Danilo at once is purely Umbrian, proud to be of his land and tradition, yet he is quite simply 'not normal' in the classic Umbrian sense. Danilo's personality is contemplative, precise and operates on pure instinct. This has allowed Danilo to guide so many great and inspired winemakers to forge new paths, change their old-conventional ways and break the mold to achieve greatness in their own work.

Today Danilo works with roughly 10 small-scale, hyper-natural producers, largely concentrated in Umbria but with extensions to the Dolomites and Rome. These projects and collaborations are intimately tied to one another. All the producers know each other, taste eachother’s wines, travel and learn together. It's a rare, nay nonexistent, element of Italian Natural wine that contributes to the overall betterment of all wines.

I first met Danilo on the phone. He called me shortly after I had finished my first (of many) visits with the amazing Mattioli family at Collecapretta. They had mentioned I should meet their longtime friend and neighbor, Danilo Marcucci. That he could be a great resource for a young and inspired importer. I've known Danilo for over 7 years now and not only do we work hand in hand but we have become fast friends. He is an unending fount of knowledge that I am grateful to have both in my professional and personal life. The rest, well, it is history in the making.