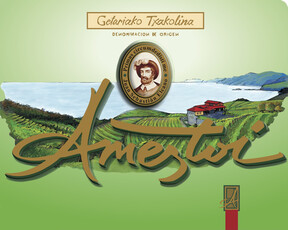 The wine that has come to define the traditional style of txakolina from Getaria. Light, crisp, refreshing, and low alcohol, Ameztoi Txakolina is bottled with a touch of residual carbon dioxide gas to give it its natural, signature, spritzy style. It is produced exclusively from indigenous hondarrabi zuri grapes at the Ameztoi estate, grown on traditional trellises high on the slopes rising above Getaria, an ancient Basque fishing village on Spain’s rugged northern coast. A joyful wine with signature salty and briny notes, crisp acidity, low alcohol, and refreshing spritz naturally complements the region’s exquisite seafood.

crafted with high acidity and low alcohol, utilizing only the native hondarrabi zuri variety. After hand harvesting, the must ferments in refrigerated stainless steel tanks using indigenous yeasts from the vineyard. Towards the end of alcoholic fermentation, the tanks are closed to preserve the natural carbonation from fermentation, which is the preferred style of Getaria. The tanks are then kept chilled to near freezing before bottling, which preserves the wine’s delicate, effervescent character and signature mousse. These attributes are unattainable through shortcuts such as force-carbonation, which Ameztoi has never employed.

Ameztoi is a renowned producer in Getariako Txakolina,

respected for producing both traditional wines in large barrels and as an innovator for their rosé txakolina and méthode traditionnelle sparkling wines. Ameztoi owns twenty hectares of estate vineyards located in the most privileged position in the region, facing the Bay of Biscay. High in the vineyards, planted on the dramatic seaside cliffs of the ancient fishing village of Getaria, one can see the town of San Sebastian, which lies just twenty minutes away along a serpentine highway.