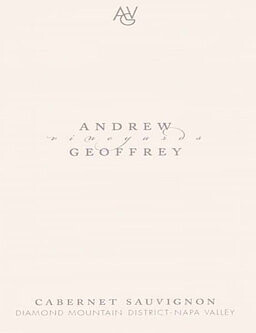 Andrew Geoffrey Vineyards is located towards the top of Diamond Mountain Road and features some of the best views in the entire northern part of Napa Valley. This is one of those under-the-radar hillside Napa producers that only those “in the know” will ever discover. This site is a vineyard only as there is no winery located here – rather the wines are made at a small family owned winery in the southern part of the valley. The vineyard and brand was founded by vintner and retired lawyer, Peter Thompson, one of the hardest working vintners in all of the Napa Valley.

The name of the winery comes from the first names of Peter’s two sons, Andrew and Geoffrey. Following in his father’s footsteps, Andrew is a lawyer in the San Diego area and Geoffrey studied at the Culinary Institute of America and is an accomplished chef currently working in the Chicago restaurant scene.

This is the only mountain vineyard in the Napa Valley that we have visited, accessed via a well cleared trail through chaparral to actually reach the vines. The trail to the vineyard is short and ends at a deck that affords one 180 degree views of the Napa Valley and nearby mountains including the tallest, Mt. St. Helena. A 1000 square foot redwood deck is the only structure on the property.

The 13+ acre vineyard sits at almost 2000 feet and usually receives a light dusting of snow each year. One year there was enough snow to take sleds down the hill in between the vine rows. Peter has held a coveted permit to plant more vines on his property for many years and in 2020/2021 the additional acreage will finally be planted to Cabernet Sauvignon. In addition to grapes from the property used for his own wines, Peter also sells grapes to several premium Napa Valley based wineries.

Peter first fell in love with the Napa Valley while attending college at the University of Southern California (USC) in Los Angeles. During a trip north in the early 1970s to attend a USC Stanford football game, his friends took him north to the Napa Valley for some wine tasting. Knowing next to nothing about wine he soon became hooked by the industry. His career was non-wine related (other then an educated consumer of wines) until 1999 when he retired from law in San Diego.

During the mid 1990’s he spent 2.5 years looking for a prime piece of hillside Napa Valley property before settling on the totally undeveloped brush covered land on some of the highest slopes of the Diamond Mountain Appellation. He remembers first visiting the property – parking his vehicle because he could drive no further and walking down a brush-covered fire road. He was able to see glimpses of the valley far below through all the trees but had no idea of the spectacular views from here until he actually cleared the land for the vineyard.

In addition to law, Peter’s background is also in geology; each part of the vineyard was carefully planted based on soil type in relation to which varieties and rootstocks would grow the best. This vineyard is predominately planted to Cabernet Sauvignon (78%) with smaller plantings of other red varieties including Cabernet Franc (18%) and Petit Verdot (4%). The vineyard is composed mostly of tuff and tufa along with a smaller percentage of volcanic ash (hence the whiteness of some the rock in the vineyard). Water is available here, but in any usable quantity, is located very deep – their well was drilled down 850 feet.

Several clones are planted on this hillside vineyard and during the wine making, each clone is treated separately. As a result, the individual clones are fermented and aged apart from each other – this gives Peter’s veteran consulting winemaker (John Gibson) additional options when crafting the final blend. For instance if there is a block of the vineyard that isn’t up to their quality standards, it will be left out of the final blend.