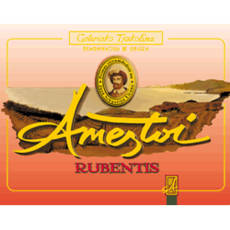 The iconic Ameztoi Rubentis rosé is a field blend of the local, indigenous hondarrabi zuri and hondarrabi beltza varieties, grown on traditional trellises high on the slopes rising above Getaria, an ancient Basque fishing village on Spain’s rugged northern coast. In the 2000s, when almost all of the other local wineries gave up on the indigenous red hondarrabi beltza vines, the Ameztoi family retained their old vines, in turn, lending their rosé such exceptional vibrancy and complexity. Rubentis, the region’s first pink wine, was inspired by the historic claret style wines which were once produced in the area long before the current global craze made rosé famous. The backbone of the blend comes from an old hondarrabi beltza vineyard planted in 1840, preserved by the Ameztoi family for generations. Ameztoi Rubentis is an authentic original, a wine that is often imitated but never replicated.

Vintage – 2020 was an extremely challenging and strenuous vintage for everyone, particularly for artisan producers in northern Spain. It was a year where the skill and experience of the producer’s work in the vineyards was paramount, as was the case with Ameztoi. A rainy spring set the conditions for outbreaks of mildew, resulting in the loss of many grapes and lower yields; however, the bunches that were unaffected were of excellent quality. The summer was quite hot and dry, which pushed the harvest forward to early September, but some relief did come in the form of sporadic rainstorms, which provided much-needed relief for the drought-stressed vines. Overall, 2020 is more balanced than 2019, with excellent, fully developed fruit, good structure, and refreshing acidity.

Vinification – After handpicking, hondarrabi zuri and hondarrabi beltza grapes are combined for destemming; the white and red grapes are worked together, not separately. After direct pressing, fermentation with indigenous yeast occurs in stainless steel at 15° C for 20 days. Towards the end of alcoholic fermentation, the tanks are closed to preserve the naturally occurring carbonation, which is the preferred style of Getaria. The tanks are then kept chilled to near freezing before bottling, which preserves the wine’s delicate, effervescent character and signature mousse. These attributes are unattainable through shortcuts such as force-carbonation, which Ameztoi has never employed.

Ameztoi is a renowned producer in Getariako Txakolina, respected for producing both traditional wines in large barrels and as an innovator for their rosé txakolina and méthode traditionnelle sparkling wines. Ameztoi owns twenty hectares of estate vineyards located in the most privileged position in the region, facing the Bay of Biscay. High in the vineyards, planted on the dramatic seaside cliffs of the ancient fishing village of Getaria, one can see the town of San Sebastian, which lies just twenty minutes away along a serpentine highway.