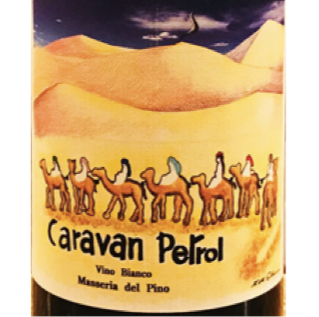 Masseria del Pino, Cesare Fulvio and Federica Turillo’s little farm upslope from Randazzo, is located on the volcano Mount Etna's northern face. This tiny winery produces only 350 cases per year but has a big name for an importer, the esteemed Kermit Lynch! Made from an ancient field blend of native varieties (Carricante, Catarratto, Minella, Pizzutella - over 100 years old), “Caravan Petrol” is a tongue-in-cheek name for the phenomenon that Federica and Cesare have observed of newcomers buying land for vineyards on Etna, completely changing the landscape with bulldozers and other machinery in an effort to profit off of Etna's popularity. It is also a nod to a Neapolitan song from the 1950s with the title “Caravan Petrol”.

A field blend of native varieties, Carricante, Catarratto, Minella and Pizzutella, this wine is lightly skin-macerated, then pressed manually and aged in a solitary chestnut cask before an unfiltered, unsulfured bottling. Charming, fresh, and textured, with suggestions of wildflowers, saffron, lemon, and nuts, this is Etna in all its raw glory.

The winemaking at Masseria del Pino is old-school. Modern technology is eschewed, farming is organic and incorporates biodynamic practices, and all the grapes are hand-harvested and crushed by foot before being fermented in tanks made from the volcanic rocks of Mount Etna. The resulting wine is undeniably terroir-driven—rich with smokiness from the volcanic soil, dense, sappy red fruit and spices from the southern climate, and a grippy yet fine tannin balanced by bright minerality from 120-year-old vines—Etna Rosso at its boldest and best.

Driving down the dusty road to Masseria del Pino, Cesare Fulvio and Federica Turillo’s little farm upslope from Randazzo, it is hard to tell which century we are living in. This is Etna in all its pastoral serenity, with only the sights, scents, and sounds of the mountain to stimulate the senses.

This simple, peaceful lifestyle is precisely what the couple envisioned when they settled here in 2005. Catania natives, they left their jobs—Cesare as a commercial air pilot, Federica as an archery instructor—to cultivate the two hectares of terraced vineyards at Contrada Pino, elevation 800 meters. They renovated the property’s ancient palmento, a traditional farmhouse featuring an old press and large fermentation vats made of lava stone, and began to work the 120-year-old vines, plus some olive trees and vegetable gardens, according to organic and biodynamic principles.